The Party is Not the Governor's PR Appendage

As I also shared on Twitter, I have been frustrated by the things happening in State & Dem Party politics over the last few weeks. Here are my thoughts on how the election law and the Party's buddy-buddy relationship with the Governor connect.

Erica Vladimer, Corey Ortega, and I recently wrote how the State's risking campaign volunteers getting COVID petitioning. Something relevant that didn’t make it into the op-ed is *establishment candidates don’t have to do this, even when challenged.*

To be clear: this is not true of all "establishment candidates." State Senators, Assembly Members, Mayor, and other candidates you might think of as "establishment" have to collect designating petitioning signature.

But statewide offices like Governor, Lieutenant Governor, United States Senator, and Attorney General can bypass this if they receive 25% of the votes of the State Committee. This is written into the State's election law, and is Party-agnostic (see the 2020 Election Law, § 6–104).

This isn’t trivial. Statewide offices need 15,000 signatures with a minimum of one hundred from each of half of the twenty-seven Congressional Districts (so at least one hundred signatures each in at least fourteen Congressional Districts). Assume candidates collect three times the required number of signatures to protect against an opponent challenging signatures and to account for invalid signatures (meaning someone signs but they are not registered with the Party or they live in a someone in a different district), and that means candidates need 45,000 signatures across a huge geography where you likely need to bus volunteers.

In 2018, Governor Cuomo was endorsed by the New York State Democratic Committee, so he got a "pass" on petitioning and was fast-tracked to the ballot because of this loophole. His opponent, Cynthia Nixon, had to invest time and money into this process that he did not just because his friends are the ones running the Party. Perhaps if the Gov didn't have backdoor access to the ballot and it was his election year with a pandemic, he'd have been sympathetic to Board of Election workers, candidates, & volunteers concerned about health and would have considered waiving the 2021 petitioning requirements in order to prevent the spread of COVID (except he did not). It’s other candidates’ volunteers out there, not his. He’s quite literally above the law here.

Why does this matter now? Well thousands of volunteers are out collecting signatures while the State took no meaningful COVID precautions. More importantly, the New York Democratic Party has been on a PR-bender for the last two-plus weeks on behalf of Governor Cuomo. The Chair of the New York State Democratic Party also sent out *five* emails between February 16th and this past week expressing unqualified and apologetic support for the Governor. The State Committee never voted on any of this. You, the voters, elected State Committee Members, including myself, but we don't have a real say when the Committee's Executive leadership does whatever they (or Governor Cuomo) want without actually consulting the membership. This is not democratic, or Democratic.

Let's not forget that the State Party spent money out of its treasury supporting the Governor's re-election while we were fighting for Democratic control of the State Senate. The Executive Committee does not share the budget with State Committee Members. We are told the total that is in the account, but no details are shared. We do not discuss or vote on how to spend the money; we are not even presented a budget. There is no transparency. 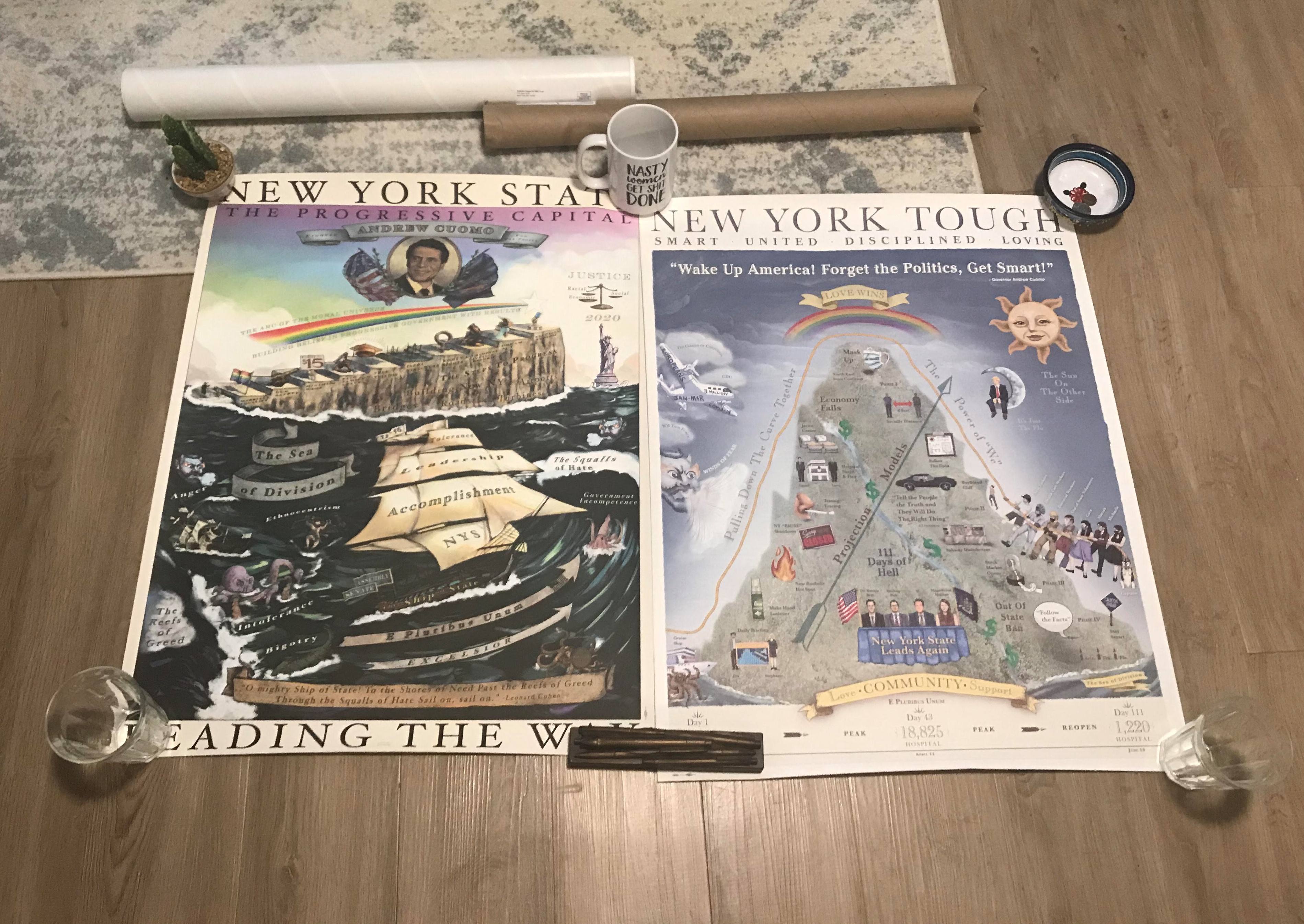 This is money the Governor clearly didn't need if he can afford these bizarre propaganda posters, sent to State Committee Members, currently collecting dust under my bed (pardon my paperweights, as the posters are curled from living in their mailing tubes).

The last two weeks have underscored some of the built-in advantages for Party favorites. The Party acts as a mouthpiece for the Governor as he's being scrutinized (rightfully scrutinized). It exempts him from petitioning with a loophole in the law, then two years later the Governor’s lawyers argue petitioning is "an essential part of the democratic process" when they refused to cancel petitioning to protect campaigns and volunteers from the dangers of COVID, and insisted on the importance of this archaic process, making it nothing more than a bureaucratic superspreader event.

Independently, the above examples might seem unrelated, but they are not. The laws and New York Democratic Party heavily favor incumbents and do not support fair elections. Both need serious reform, but that won’t happen with current leadership. Regardless of who's leading, the Party MUST distance itself from the Governor. The Party serves you, the voters. The State Committee should grow the Party, help in down ballot races, and preserve our Legislative control, not act as an appendage of the Governor's campaign and office. New York is overwhelmingly Democratic with many competing viewpoints. We can’t be that and run fair elections if the Party is a rubber stamp for the people at the top. The whole thing is quite frankly gross, and as a State Committee Member, I’m ashamed how this became damage control for "Cuomo 2022."

We have a lot of work to do, and the only way we can make real progress is to elect real progressives to both the Legislature and to volunteer Party positions like County Committee, District Leader, and State Committee. If you want to work on reforming our Party together, please reach out at [email protected]
Do you like this post?
Tweet